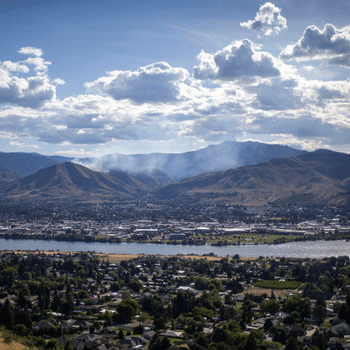 The FCC rules require that advertisers do not lie about their products or other products, but these same rules do not apply to political ads?

Liked by Mr. Mark Johnson and 1 other

I just returned from a daily bike ride around the loop.

Has anyone else noticed how many little black bags, neatly tied at the top, have been left on the side of the trail?  What's up with that?  I don't know whether a person who leaves their dog's waste bag on the side of the trial, does so accidently, or if they do so intentionally.

It's great to know that "some" people actually do clean up behind their furry friends, but cleaning up a mess, depositing it into a waste bag, and then leaving the bag behind, should be unacceptable by most standards.

Liked by Alisa Oliver and 8 others

The Roundabout Set for Easy Street and Highway 2/97

Roundabouts probably work if people knew how to drive in them. Those roundabouts that have been placed in locations that see to be less busy seem to work better. The problem with them is when they are placed in busy streets--such as the one on the east side of the George Sellars bridge. People who have driven the Sunset Hwy. for years, just barrel on through and they don't pause or yield for the traffic coming out of East Wenatchee. The traffic going north does not slow or yield to the traffic coming out of East Wenatchee to go to Wenatchee.

The area the road department wants to put a new round about in to replace the light that is currently seems like a waste of taxpayers money. The light seems to work perfectly well. The people coming off the bridge heading towards Cashmere or Wenatchee will slow because they can't go straight, but they typically will not yield the road to the cross traffic on Easy Street.

There is a roundabout in Olympia on Marvin Road, two lanes on the roundabout. I have driven that one many times and the people traveling south on Marvin Road typically do not yield to allow traffic to merge on the Yelm Highway. This isn't knew and this isn't because it is in Olympia. You see the same kind of driving happen here. It is almost as though someone needs to train drivers how to use roundabouts correctly.

Liked by Randy Agnew and 4 others

Irrigation: A time for prayer

I followed the filling up of the Wenatchee Reclamation District's canals on Monday. It's a sign of spring and new life as the water is used in orchards and lawns up and down the Wenatchee Valley. For me, it's a time to pray as I'm the manager of my neighborhood's irrigation system. It's a system my father was instrumental in upgrading some 40ish years ago and there is always intrepidation as I turn the valve on at the ditch letting it rush into the pipes that run past houses and along streets on the way to my house and those around me. Will this be the year the pipe springs a leak? I came across a couple working on their neighborhood irrigation line earlier Monday and they had the same concerns.

Liked by Davis Wealth and 3 others